Groups (or Roles) are the user groups categorized by users' job titles and job roles, not by the departments to which they belong.

In kintone, you can select a group (role) in a group selection field, and configure permissions and process management assignees for a group (role).

You create and manage groups (roles) in "Groups (or Roles) & Members" screen in Users & System Administration.
There are two types of groups (or roles): static and dynamic.

This section shows an example of assigning "Manager" group (role) to Managers of Human Resources and Finance divisions, in Users & System Administration. 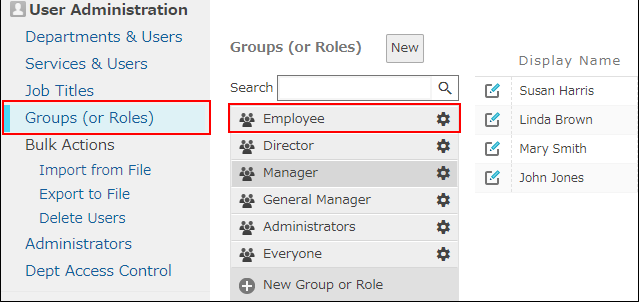 Assign permissions to view, edit and delete "confidential" records in apps only to "Managers" group (role).

The records look different depending on what kind of permissions are assigned.

Note
For details on permissions, see Managing Permissions.
Was this information helpful?